However, I would argue that the most significant reason that it has received less attention is because it is complicated and different from other social media APIs. While most platforms expose some flavor of a REST API, Facebook exposes a graph-based API. In a graph, the primary unit is a node. A node may be of different types (e.g., a page or a user). Depending on the type, a node will have different fields and edges. A field is an attribute of the node, e.g., name or description. An edge is a connection to another node, e.g., featured_video is a connection to another node (which is a video type) that is the featured video of the source node; comments is a connection to a set of nodes (which are comment type) that are the comments of the source node. (For a further discussion of why Twitter is the “model organism of big data” and why this is problematic, see Zeynep Tufekci’s “Big Data: Pitfalls, Methods and Concepts for an Emergent Field”.)

In this blog post I will describe f(b)arc, a python tool I wrote for collecting data from the Facebook Graph API. (In case you were wondering, the “b” is silent in f(b)arc.) For the purposes of this post, I will use the example of the Facebook page of Senator Mark Warner. 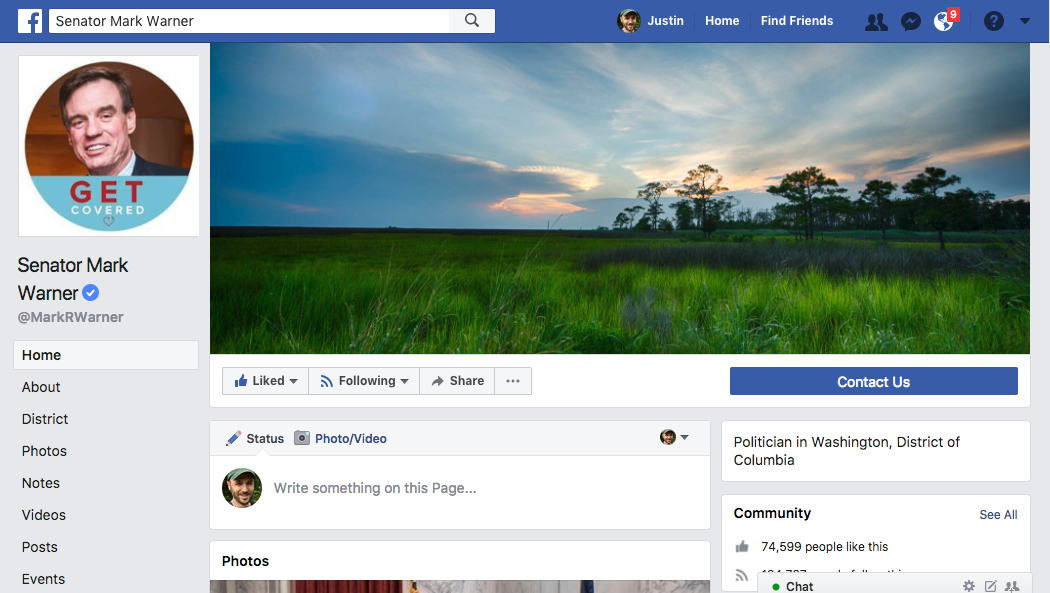 Brief introduction to the Graph API

Here I request the node for Senator Warner’s page:

Each node has a numerical id, but some nodes also have string identifiers (e.g., “MarkRWarner”).

In addition, each node has a type. Depending on the type, the Graph API will return certain fields by default. In the case of the page, those fields are name and id, as shown above.

You can request specific fields for a node. Here I request the about and fan_count fields.

In addition to fields, you can also request edges for a node. Here I request the albums edge (limiting to 2 albums). 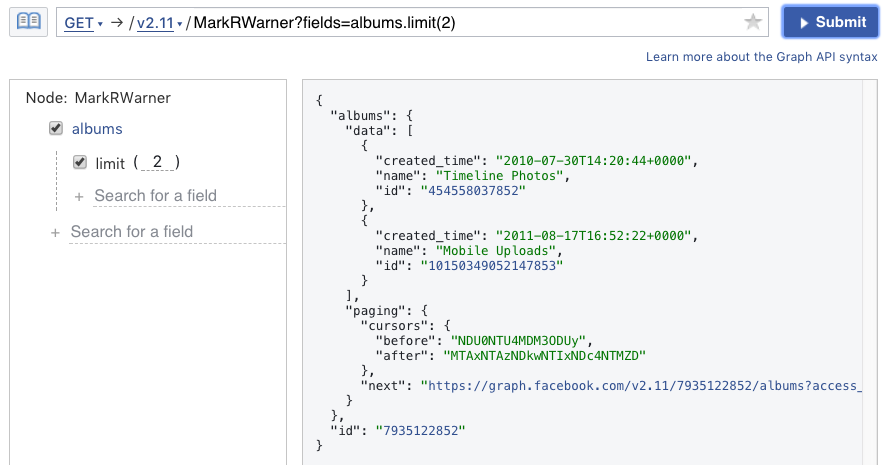 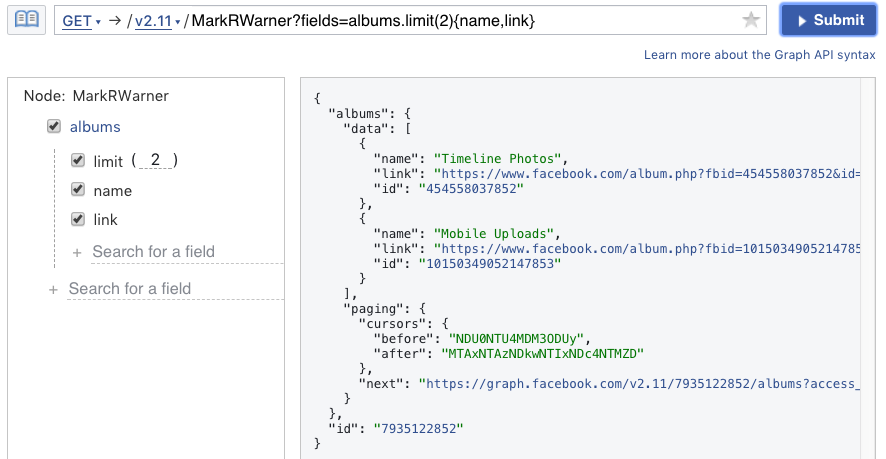 The Graph API is optimized to allow requesting just the data required with as few requests as possible. The goal is to make it efficient for a Facebook application (as apps are the primary user of the API) to interact with the Facebook platform.

There are some additional features of the Facebook API that are significant, but I won’t cover in this brief overview:

The height has no settings. This means that this field is retrieved whenever a photo node is retrieved.

The can_backdate field has omit set to true. This field is ignored. To aid with creating definitions, f(b)arc introspects the API to extract all of the fields and edges for a node type (see the metadata --template command; omitting is useful for keeping track of fields/edges that you have considered, but decided not to retrieve either because they require additional permissions or aren’t worth collecting.

The full definition for a photo has many more fields and edges. F(b)arc ships with definitions for albums, comments, events, live videos, pages, posts, photos, and videos. You can also add local definitions that override these default definitions.

To execute this command, f(b)arc constructs a request based on the page definition. For larger edges, the API will not return all of the results at once; f(b)arc will follow the paging links to construct the entire node. As this may require many requests to the API, constructing the entire node may take some time.

By default, f(b)arc will only retrieve the requested node. Using the --levels argument, f(b)arc can be instructed to retrieve the nodes for edges as well. For example, if levels is set to 2, the photos, albums, events, videos, posts, and live videos from Senator Warner’s page will also be retrieved.

Facebook data retrieved from the API is JSON. Here’s a snippet from a photo:

The full JSON is available here.

To assist with exploring data that has been retrieved from the Facebook Graph API, f(b)arc provides f(b)arc viewer, a simple web application for rendering the data, as well as navigating between connected nodes. 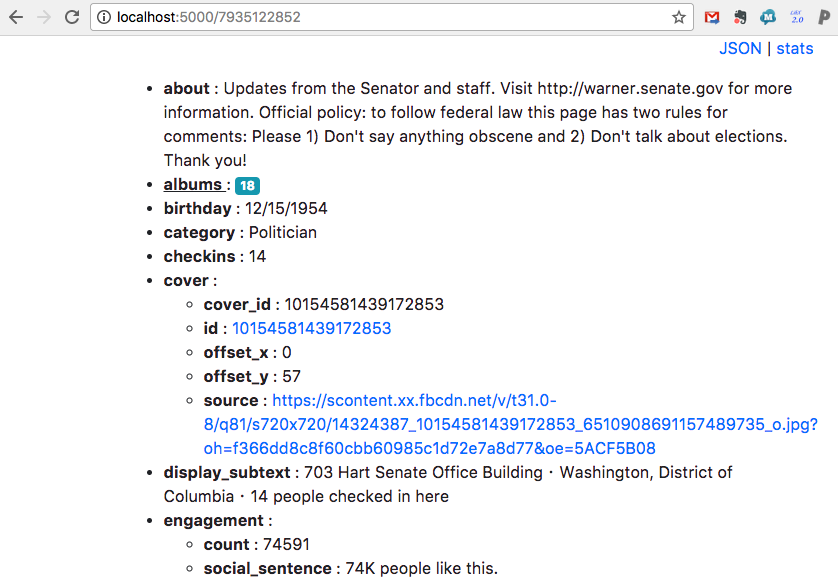 f(b)arc viewer can be launched with:

Or the data retrieved by f(b)arc can be passed directly to the viewer:

The data from Senator Warner’s page can be viewed here. (This is a static copy; let me know if you encounter any problems.)

All of these optimizations are configurable. So, for example, the number of photo nodes included in a node batch can be configured in the photo definition.

Like other social media platforms, Facebook does have rate limits on retrieving data from the API. These rate limits take two forms: (1) limits on the number of requests within a time period and (2) limits on the amount of data that can be returned in a single request.

In my work to date, I have only encountered rate limiting on the number of requests once. (At the time, for development reasons I was running multiple instances of f(b)arc with the same token.) To be considerate of the API and to avoid this rate limit, f(b)arc makes no more than 2 requests per second.

The second type of rate limit, limits on the amount of data that can be returned in a single request, occurs quite often. It takes the form of a “Please reduce the amount of data you’re asking for, then retry your request” error. Unfortunately, there is no way to know how much data will be returned by a request in advance. F(b)arc attempts to deal with this type of rate limit by using sensible defaults for edge limits and node batches. When it encounters this error, it retries by requesting a single node at a time.

This does not mean that all activities of individual users are restricted. Public comments, e.g., comments on a video posted on Senator Warner’s page, can be collected. Though these comments are public, they may still contain sensitive information that deserves ethical and privacy consideration. 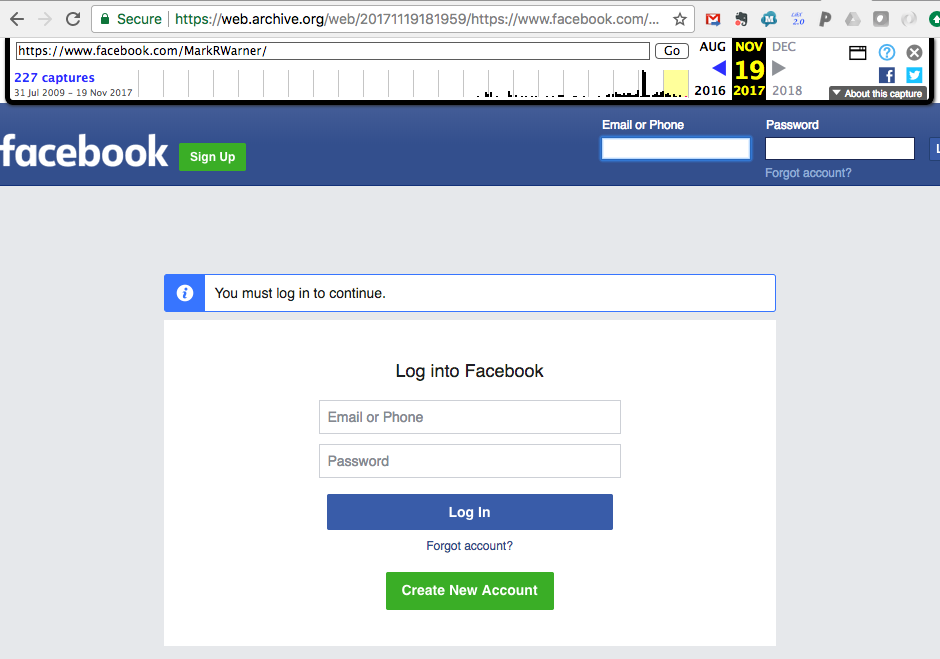 For both the purposes of current research and to fulfill our obligation to preserve our cultural, social, intellectual, and political heritage, I am convinced that collecting data from the Facebook Graph API is imperative and a critical gap that must filled. I welcome feedback on f(b)arc and invite collaboration on its future development and/or use.